Thanks to our friends at the East Bay Times, Civicorps is proud to share this article, published December 5, 2021.

Share the Spirit: Facing tough times, Oakland residents get back on career track through Civicorps

Founded in 1983, the nonprofit finds clients through word-of-mouth and focuses on environmental work through a network of conservation corps across California.

OAKLAND — During a recent stroll through the large warehouse that Civicorps calls its headquarters and where so many fledgling adults find a way out of life’s setbacks, it’s sinking in on 21-year-old Jasmine Lagunas that she will soon need to leave.

“I really don’t want to go,” Lagunas tells Libbie Hodas, a manager at the nonprofit that has helped struggling young adults pick up paid work experience, complete their education and get back on their feet.

In Lagunas’ case, that time is now. She has ambitions of becoming a registered nurse, and her masterful use of chainsaws and pole saws — learned through Civicorps’ extensive training programs — could get her much needed income until she achieves her goal.

Eduardo J. Chaidez spends his days providing the public with meaningful connections to the natural, social and cultural history of California.  Creating hands-on educational programs, leading tours and conducting outreach, Eduardo is a multi-faceted professional.  Is he an anthropologist? Perhaps a curator at a museum?  If you guessed Interpretive Park Ranger for the National Park Service, you are correct!

Eduardo serves at the John Muir National Historic Site in Martinez, CA. The National Park Service seeks to tell the story of this country through its cultural and natural resources: who we came to be as a country and the people who shaped its direction. Eduardo believes it is of utmost importance that people with a similar background to his have an opportunity to shape how the story of our country is told.

Twenty years ago, Eduardo was a young adult without known prospects.  A kid from deep East Oakland and the son of an undocumented mother of four who survived domestic abuse, he could have let statistics define him.  Instead, he forged his own identity. He paved a fruitful professional path for himself through determination, commitment, and the guidance he found at Civicorps.

Upon entering our program in 2002, Eduardo found the community and encouragement he needed to confidently explore new horizons.  He became a Crew Leader, worked on a backcountry trail crew in Yosemite, and traveled on a unique adventure to Senegal, West Africa with Civicorps staff and other Corpsmembers.  He earned his high school diploma with us in 2003, and used the tangible skills he learned at Civicorps to work in landscaping and construction while taking courses in horticulture to advance his career prospects.  Working full time doing manual labor and taking community college courses part time was not an easy path, and balancing the two took nearly a decade.

Eduardo’s life then took a traumatic turn when he lost his oldest brother Alex to gun violence.  At that point, he decided to dedicate himself full time to his studies at Merritt Community College in Oakland, and then transferred to UC Berkeley.  He earned a joint Bachelor’s degree in Art Practice and Ethnic Studies from Cal.  He subsequently earned an MA in Visual and Critical Studies from the prestigious School of the Art Institute in Chicago.  Ultimately finding his way to the National Park Service, Eduardo is now enjoying a career that blends his passion for natural conservation and cultural history, and taps his talent for storytelling and public speaking.

And now, the Board of Directors at Civicorps will benefit from Eduardo’s leadership.  He was unanimously nominated and elected to the Board, and participated in his first Board meeting on July 15, 2020.

I have always believed that my life’s path would have been totally different if it had not been for the Corps. Giving back to the Civicorps community has been a goal of mine for some time and I believe this is a perfect opportunity to do so.

As a Civicorps graduate, Eduardo brings an extremely valuable – and particular – perspective to the Board. He is a product of and embodies Civicorps’ mission. He earned his high school diploma, gained job skills that gave him a direction in life, pursed and achieved higher education and is currently on a family sustaining career path. Through his experiences, he has honed his commitment to personal and professional excellence.  Eduardo hopes that by joining the Board, he can continue to cultivate an environment of inspiration for current and future Corpsmembers.

“I really love the perspective that Eduardo will bring to the table as a Board member,” muses Tessa Nicholas, Executive Director. “I’m so impressed that he took such full advantage of the opportunities the Corps offered him. I’m inspired by his journey beyond Civicorps; his work in conservation and education brings him back full circle to us, and makes him the perfect fit for our Board.”

If you live in California, you’re probably already used to the fact that the rest of the country follows our lead on innovations in everything from tech products to the entertainment industry to environmental policy.  We’re proud to say that Civicorps’ unique career pathway partnership with Waste Management is no different — it’s been noticed by an environmental and labor coalition in New York City and featured in their recent Just Jobs for Waste Workers report.

coalition is dedicated to transforming New York City’s commercial trash industry to reduce waste and pollution, foster clean and healthy communities and create good jobs.  Enter Civicorps!  Former Civicorps Recycling driver Kiara Alexis, featured last year on KTVU Fox Channel 2’s “Bay Area People”, is recognized in the report as a trailblazer to emulate.  Her experience, illuminated on page 12, is lifted up as an example to cities to “prioritize hiring and job training for communities that are often excluded from good jobs.”
The entire report is aimed at recommendations for how sanitation policy in New York City, but applicable anywhere, “could make life better…while making the city safer and more sustainable.”

Congratulations to Kiara Alexis and to the two Corpsmembers featured on the front cover of the report, Jocelyn Hernandez and Jovante Jackson!  We are so proud your hard work has been recognized.

“The best part of my job is that a lot of women come up to me and feel inspired that I am a truck driver.” – Kiara Alexis, Teamster Apprentice at Waste Management

Share the Spirit: Woman who got help at Civicorps to turn her life around now wants to help others

OAKLAND — Tyneisha Crooks’ late father didn’t want his children “stuck on stupid,” she said. It was his way of telling her and her 10 siblings that to get anywhere in life they needed an education.

“Education was a big thing to him. You have to get a high school diploma to support yourself,” was part of his mantra, she said. “Without it you can’t do anything.”

Crooks admits it took her awhile to heed his wisdom. At Antioch High School her senior year, “I wasn’t feeling it. I would leave for school and not even go to school almost every day.” 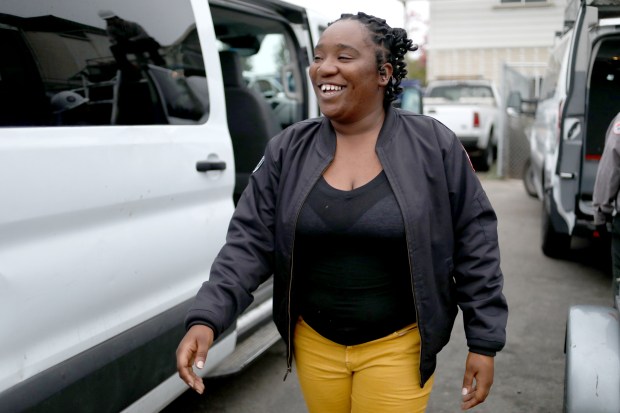 Civicorps alumni Khris and Kiara, are featured in the San Francisco Chronicle. Their journeys of hard work has brought them to their dream career. We are proud of Khris and Kiara for working so hard in becoming Waste Management Teamster Apprentices.

“It’s a career I love.I can send my daughter to college if she wants to go.” – Khris Bland, Civicorps alumn

“The best part of my job is that a lot of women come up to me and feel inspired that I am a truck driver.” – Kiara Alexis, Teamster Apprentice at Waste Management